Exports from top 6 countries with cost per unit of more than USD 1000 for products under HS Code 848710: 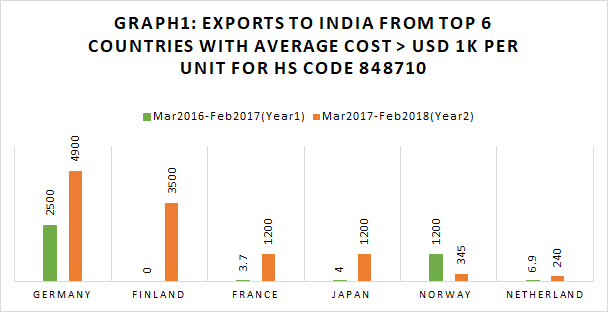 Graph1: Exports to India from top 6 countries with average cost>USD 1K per unit for HS Code 848710

Exports from Countries with cost per unit less than USD 1 Thousand for products under HS Code 848710: 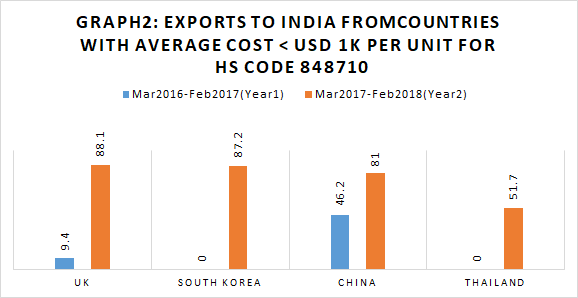 Graph2: Exports to India from  countries with average cost<1K per unit for HS Code 848710

Why Korea and other countries  should focus on doing More exports to India for products under HS Code 848710:

There are two geographical factors that put the Indian maritime sector at an advantageous position – the vast coastline of 7,500 km and the strategic location along most major shipping highways. For years, the maritime routes have been used for trade and a show of strategic strength. Today, the country boasts of a modern shipbuilding and shipping sector, replete with all the variables necessary for overall industrial growth and hence the imports of products under HS Code 848710 has increased.

Combined, these factors provide a strong basis to attract big investments in the Indian maritime sector. In fact, as per Prime Minister Narendra Modi, the sector has huge potential to become, “the engine of growth” for India, and many countries have offered hand for the industrial growth of Maritime industry and South Korea is one of them.Republic of  Korea(ROK) offered to provide US$10 billion financing (development assistance and concessional credit) to India for infrastructure projects. Recognizing the importance of shipping industry in the bilateral relationship, PM also visited Shipyard of Hyundai Heavy Industries in Ulsan. Leaders of both countries addressed the inaugural session of India-Korea CEOs Forum to promote the bilateral economic cooperation, while PM also met the leadership of the top Korean conglomerates.Increased investments together with the ‘Make in India’ impetus can increase the sector’s contribution to GDP and trade volumes. The government has launched a number of major initiatives such as the Sagarmala project, ports modernization and Inland Waterways & Coastal Shipping development. The increasing public-private partnership in response to these initiatives adds to the vibrancy of the sector and is a clear sign of resurged interest in its potential. What this also means is that public and private players are now more eager than ever to play a bigger role.

Maritime Summit  was held for the first time from April 14th-16th, 2016 the objective of the summit was to create awareness about the potential in the Maritime industry and tap the investment opportunities for the same.Secretary General of International Maritime Organisation, Mr. Kitack Lim and Minister of Oceans and Fisheries, Republic of Korea, Mr. Kim-Young Suk also addressed the gathering during the Inaugural Session. Republic of Korea was the Partner Country for the Summit. A delegation from Republic of Korea led by Minister of Oceans and Fisheries along with two Deputy Ministers, senior Government officials and representatives of over 50 maritime sector companies participated in the Summit. The involvement of the Korean Government in the progress of Maritime industry indicates that Korean Government is finding a niche in this area and trying to expand their hands for the betterment of the Indian Maritime industry development so that in future Korean companies can have More Exports of the products under HS Code 848710 to India.

What are the custom duties and taxes applicable for the HS Code 848710:

The import customs and duties play a major role for exporters to export their products globally, cause at the end the final price of the product with duties and taxes decide whether the product is affordable for the target audience or not. To solve this problem we provide with the custom duties and taxes applicable for HS Code 848710.

For products under HS Code 848710 the Basic Custom Duty(BCD), is 7.5% and Social Welfare Surcharge(SWS) is 10% of (BCD) and there was a preferential notification-050/2018-A1030,after the addition of preferential notification, the Basic Custom Duty decreased to 4125, 55% less than the earlier BCD. The indirect tax, known as GST(Goods & Services Tax) will be levied in a similar way it is applicable for all other domestic goods in India. Currently the GST rate is 18% of (AV+BCD+SWS) where AV= Assessed Value.

Who is Importing the products under HS Code 848710:

The products under HS Code 848710 is mainly imported in the cities like Cochin, Mumbai and Hyderabad. Based on Ekport Lead Generator, some of the companies that import products under HS Code 848710 in Mumbai are: Micron, Killick Agency and Marketing Limited, NASS Engineering Services and in Cochin:Safe industries and Marine stores, SMI Propellers,Saraswathi Metal Works.