The above graph shows a Year-on-Year comparison for monthly global exports to India for products under the HS Code 870840. It can be seen from the graph that every month the exports for Year 2 are more than the corresponding month of Year 1. This increase ranges from USD 3.9 Million to USD 45.9 Million and the highest increase(USD 45.9 Million) was noted for the month of December 2017 .There has been a noticeable trend towards more exports to India for Gear Boxes which fall under the HS Code 870840. 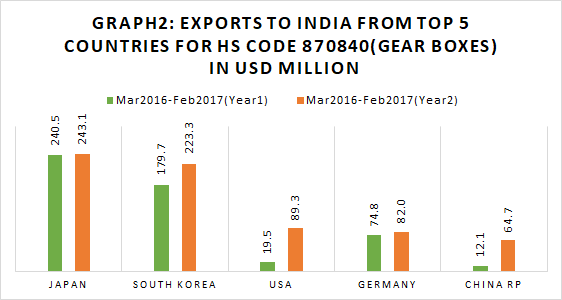 Gearboxes(HS Code 870840) are used in the Automobile Industry and plays a vital role in the manufacturing of vehicles, as it a critical part of a vehicle for its functioning. The manufacturing of Gearboxes ( HS Code 870840) is not that strong in India to fulfill the rising demand, due to lack of infrastructure for manufacture process and low skilled manpower who are unable to design and construct grearboxes of International quality, for better quality and designed gearboxes India imports them from other countries.

India is the sixth largest Producer of Automobiles in the world with annual sales of 25 Million vehicles in 2017 as compared to 26 Million vehicles in 2016, there have been a growth of 1 Million vehicles as compared to the previous year which in fact is a significant one. India has four large auto manufacturing hubs across the country: Delhi-Gurgaon-Faridabad in the north, Mumbai-Pune-Nashik-Aurangabad in the west, Chennai- Bengaluru-Hosur in the south and Jamshedpur-Kolkata in the east. The Automobile sector contributes to 7.1 % of India's Gross Domestic Product (GDP) by volume and it is estimated that six million hybrid plus electric cars to be sold annually by the year 2020 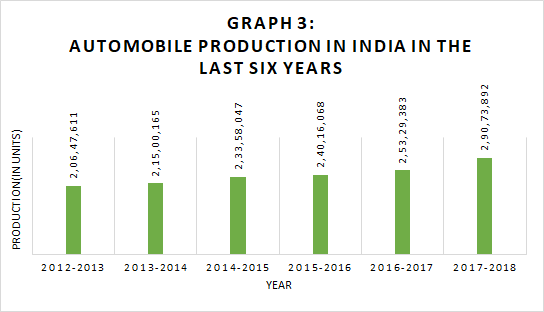 Graph 3: Automobile production in India in the last 6 years

What are the custom duties and taxes applicable for the HS Code 870840:

The import customs and duties play a major role for exporters to export their products globally, cause at the end the final price of the product with duties and taxes decide whether the product is affordable for the target audience or not. To solve this problem we provide with the custom duties and taxes applicable for products under HS Code 870840.

For products under HS Code 870840 the Basic Custom Duty(BCD), is 15%, in other duties Social Welfare Surcharge(SWS) is 10%of(BCD), The indirect tax, known as GST(Goods & Services Tax) will be levied in a similar way it is applicable for all other domestic goods in India. Currently the GST rate is 28% of (AV+BCD+SWS) where AV= Assessed Value.

Who is Importing the products under HS Code 870840: