The above graph shows a Year-on-Year comparison for monthly global exports to India for products under the HS Code 854140 . It can be seen from the graph that every month the exports for Year 2 are more than the corresponding month of Year 1.This indicates that there has been a noticeable trend towards more exports to India for Photosensitive semiconductor devices and light emitting diodes(LED).

As per the international Harmonized System, Photosensitive semiconductor devices, including photovoltaic cells whether or not assembled in modules or made up into panels; light-emitting diodes (LED): are categorized under HS Code 854140 for international trade. For the purpose of local Indian regulation, tax, custom duty and policy enforcement, Indian authority further bifurcates / classifies the products under HS Code 854140 using an 8-digit ITC code. For example: 854140 11 which is for Solar cells whether or not assembled in modules or panels, HS Code 854140 19  which stands for Other Photocells, HS Code 8541 40 20 which stands Light emitting diodes (electro luminescent),ITC Code 854140 90 which stands for Other Light emitting Diodes(LED) under the name “Other”. These HS Codes together amounted to USD 4.6 Billion worth of India’s Imports during Year 2 which indicates a strong demand for HS Code 854140 in India. 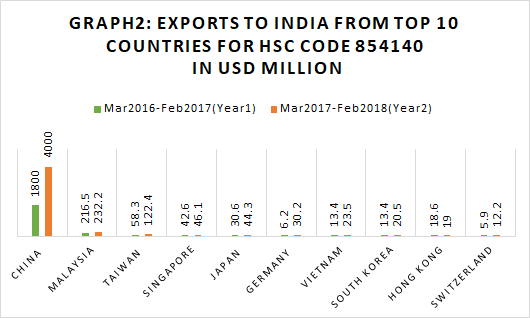 Why Germany should focus on doing More exports to India for products under HS Code 854140: 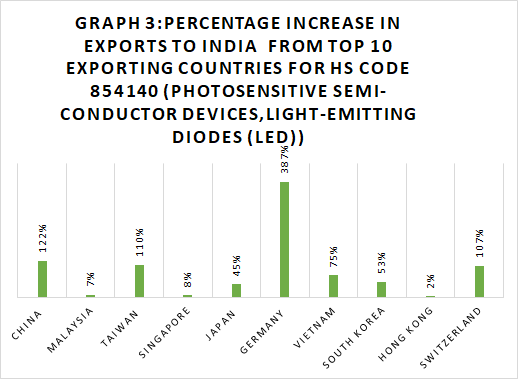 Semiconductor industry in India has seen a considerable growth in India in past few years due to the advancement in technology and the Make in India initiative introduced by the Prime Minister of India Mr. Narendra Modi in september 2014 to encourage industries to manufacture their products in India, with this initiative the demand for raw materials increased due to limited manufacturing of  resources in India which in turn led to increase in imports of products under HS Code 854140. The demand for  Light emitting diodes (electro luminescent) (HS Code 854140 20) has certainly increased due to the emergence of new industries from evolving technologies and even the Indian government has shown the support for LED’s product usage for the benefits of the consumer, further the government has be helpful with favourable trade traffics for more imports of LED’s for product manufacturing.LEDs lighting penetration in India is expected to increase exponentially during the coming period replacing the traditional halogen,and incandescent night lamps even in rural areas. The LED market is based on application areas such as lighting, displays & backlights, mobile devices, signs & boards, LED for automotive, LED for vehicle and others. The application area of lighting has further been divided into sub-application areas of indoor lighting and outdoor lighting along with bifurcation into the products of bulbs, street lights and spotlights. Outdoor lighting, underground LED and other types of LED such as SMD LED, infrared LED and other wavelength LEDs  is expected to grow with the highest growth rate among application areas for LEDs in the Indian market.The use of LED is different areas will definitely bring in More Exports of  LED to India and also for the fact that India is massively growing both in innovation and manufacturing, the use of LED’s will extensively increase over the years.

The solar industry in India is a fast developing industry, India’s solar installed capacity reached 20 GW in February 2018. India expanded its solar-generation capacity 8 times from 2,650 MW on 26 May 2014 to over 20 GW as on 31 January 2018 The Indian Solar Power Industry is expected to have a fine growth in the upcoming years due to the increase in the consumption of electricity and the initiative by the Indian government to have electricity in all remote areas and villages has led to push of solar energy installation capacity as compared to previous years and also the lack of resources which are inadequate to surpass the demand and consumption of electricity from the consumers and also the government’s policy of increasing the share of Solar power in countries energy mix by decreasing the import duties for equipments required to generate solar power which in turn has led to decrease the power tariffs across the nation  the reason behind the increase of Solar cells whether or not assembled in modules or panels (HS Code 854140 11) , more than double.

The main industries covered for the products under HS Code 854140 is the Semiconductor Industry(LEDs) and the Solar industry, which are probably one of the most growing industries in the near future in India which the view of the current consumption which has increased drastically compared to previous years, Germany has strong chances of getting their hands dirty in the Indian market for products under HS Code 854140 and think of More Export to India because of the increasing demand and also the supply by the local manufacturers is not adequate enough to fulfill the needs of the masses.

What are the custom duties and taxes applicable for the HS Code 854140:

The import customs and duties play a major role for exporters to export their products globally, cause at the end the final price of the product with duties and taxes decide whether the product is affordable for the target audience or not. To solve this problem we provide with the custom duties and taxes applicable for products under HS Code 854140.

For products under HS Code 854140, the Basic Custom Duty(BCD) is NIL (0%) and also the other duties like Special Custom Duty(SCD) are NIL (0%), which means that there will be no duty charged on the import of products under HS Code 854140. The indirect tax, known as GST(Goods & Services Tax) will be levied in a similar way it is applicable for all other domestic goods in India. Currently the GST rate is 18% of (AV+BCD+SCD) where AV= Assessed Value.

Who is Importing the products under HS Code 854140:

The products under HS Code 854140 are mainly imported in the regions like Mumbai,Chennai, Andhra Pradesh and Gujarat of India. Based on Ekport Lead Generator, some of the companies that import products under HS Code 854140 (Photosensitive semiconductor devices,light-emitting diodes (LED)) in Mumbai are: Smart Hitec, A V Enterprises, Kritron, in Chennai are: LIGHT ZONE, Micro Crafts - LED Display Board Manufacturers in India, Muhit Tijara Pvt Ltd and in Gujarat are: Santosh international, NEXUS International, SK IMPEX.