25X Growth for HSCode 851762 - Has Korea figured out the secret to More Exports to India?

As per the latest trade data available on Ekport, there were 58% more exports to India for HS Code 851762 which includes products like transmitters, receivers, cable modems, network switches, chargers,carrier systems, multiplexer and other communication devices used in telecommunication to transmit or receive signals from one device to other etc. Exports to India for products under HS Code 851762 was USD 2.5 Billion during Year 1 (Mar 2016 to Feb 2017) and it increased to USD 3.9 Billion during Year 2 (Mar 2017 to Feb 2018). 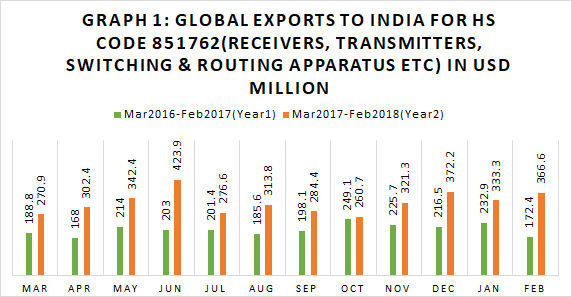 The above graph shows a Year-on-Year comparison for monthly global exports to India for products under the HS Code 851762. It can be seen from the graph that every month the exports for Year 2 are more than the corresponding month of Year 1. This increase ranges from 5% to 113% and the highest increase was noted for the month of February in year 2.This indicates that recently there has been a noticeable trend towards more exports to India for Receivers, Transmitters and other communication devices and products which fall under the HS Code 851762. 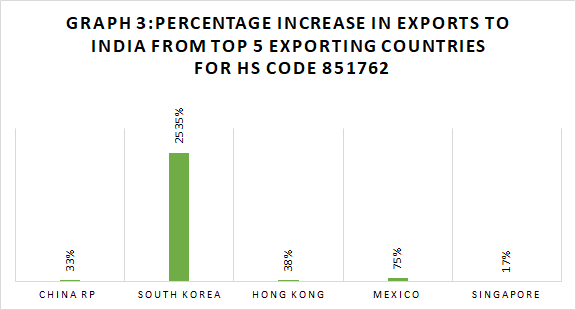 Out of the total commodities under  HS Code 851762 majority of the imports are from  Modems(modulators-demodulators) (HS Code 851762 30) and Other products related to HS Code 851762(HS Code 851762 90) the main reason would be the growing use of technology and science and to make India pollution free with the introduction of various alternatives which reduces the consumption of natural resources, one such incident is the introduction of Electric Vehicles with ISO( International organization for standardization) IEC15118 standards which is basically for electric road vehicles and electric industrial trucks,which is already used extensively in the United States where the Electric Vehicles(EV) are produced by TESLA and in other countries.The introduction of Electric Vehicles(EV)in India, in huge number will lower the consumption of petrol and diesel vehicles and in turn make the country a little pollution free and a better place to live. The projects have already been assigned to Giant auto manufacturers such as Mahindra & Mahindra Ltd and Tata Motors Ltd , which cover the majority of the Indian Auto industry, thought the transformation is in the initial stages but the government of India is aiming to have more than 30% vehicles run on electricity by 2030. This initiative will attract a lot of importers from various parts of the world to have More Exports to India of the products related to electric Vehicles such as Electric Vehicle(EV) charger, Electric Vehicle charger communication modems, cables other modems etc. It is also said that the duties and taxes imposed on the imports for these commodities will reduce, thus making exporters of such products from different countries excited especially Korea who is in a big way eyeing India as an important market to to have More Exports to India.

Power is most crucial component for economic growth of the nation. The changes in the existence and development of adequate infrastructure in power sector of India is essential for the sustained economic growth of India. The consumption of electricity has been increasing over the period of time due to the innovations and technologies and also policies led by Indian government to have electricity in all the villages and remote areas of India, due to the increase in demand of electricity in India, massive addition to the installed generating capacity is required. Better transmission and generating electricity components are required to fulfil the rising demand of electricity, better power grid transmission systems are required to transmit and transform electricity to various power substations to parts of the country. For better quality transmitters India imports those transmitters from countries like Korea, China USA etc having Coarse Wavelength Division Multiplexing (CWDM) technology for transmission in large wavelengths and wide bandwidths and having High-availability Seamless Redundancy (HSR)  a network protocol for Ethernet that provides seamless failover against failure of any network component. This will lead to more inflow of products under HS Code 851762 and More Exports to India, with the innovations brought by Power Grid Corporation of India Limited (POWERGRID),which is an Indian state-owned electric utility company headquartered in Gurugram, India. POWERGRID transmits about 50% of the total power generated in India on its transmission network.Technology and innovations have constantly increased in India and people have also upgraded the knowledge with the same to come in line with the new things that are constantly coming into the market.

Ever since the discovery of internet and mobile phones in 1995. In India out of 3 people 2 people have mobile phones, which means that people in India are extensively depended on mobile phones and other be it rich or poor or be it urban or rural areas everyone nowadays has a basic mobile phone. Wireless communication devices have extensively found their place in the Indian market due to the growth of technology and also the young Indian population which constitutes for 65% of the total population using new age technology for better performances. Its not just the use of mobile phones but also the use of wireless telephones, satellite televisions, wireless computer parts, GPS, Bluetooth, Wifi etc has made the lives easy and not all these devices are manufactured in India, but they are imported in large numbers and many countries are doing More Exports to India of such products. Korea is one of the leading companies to have More Exports to India of the above product and Samsung being one of the giants surely encourages other Korean telecommunication companies to have their products in Indian market.In todays date almost every house has a internet connection which is provided by the internet service providers through cable modems and other communication devices, and network switches that connects devices together on a computer network by using packet switching to receive, process, and forward data to the destination device. CCTV(Closed Circuit Television) are widely used nowadays due to the increase in security in corporate and household buildings. The government has also proposed that CCTVs should be installed on railway stations and trains for safety purposes which will give a boost to the imports of CCTVs from different parts of the world.

What are the custom duties and taxes applicable for the HS Code 851762:

The import customs and duties play a major role for exporters to export their products globally, cause at the end the final price of the product with duties and taxes decide whether the product is affordable for the target audience or not. To solve this problem we provide with the custom duties and taxes applicable for products under HS Code 851762.

For products under HS Code 851762, the Basic Custom Duty(BCD) is NIL (0%) and also the other duties are NIL (0%), which means that there will be no duty charged on the import of products under HS Code 851762. The indirect tax, known as GST(Goods & Services Tax) will be levied in a similar way it is applicable for all other domestic goods in India. Currently the GST rate is 18% of (AV+BCD+SCD) where AV= Assessed Value.

Who is Importing the products under HS Code 851762:

In all, the exporters of products under HS Code 851762 will find its buyers in India from various industries.The infrastructure and resources in India are not adequate enough to fulfill the ever growing demands of different products so there will be a need to import various high end products with better quality and functioning for smooth operations of various industries in India. The main Industries which will focus to import these products will be Electronics and Telecommunication industry, Auto Industry, Textile Industry etc. The main cities in which the products under HS Code 851762 in India are imported are Mumbai, Delhi, Chennai and Cochin. Based on Ekport Lead Generator, some of the companies that import products under HS Code 851762  in Mumbai are: Fastech Communication India Pvt Ltd, G.M. Modular Pvt Ltd, Star Tech Electronics, in Delhi: Amazing security System, Space Telelink Ltd, Pooja Electronics and in Chennai: Horizon Secure Pvt Ltd,D.C.S Enterprises, Shreyas Communication and Systems Pvt Ltd.

Sameer Shah is an Australia India Trade Expert (AITE) at Ekport. While most of his network and resources are focused on trade between Australia and India, his international trade network spans across Finland, Denmark and Canada as well.