As per the latest trade data available on Ekport, there were 37% more exports to India for HS Code 847160 which includes products like graphic printers, computer mouse, air mouse, plotters, USB scanners, keyboard, scanners, fingerprint scanners, computer peripherals and accessories, and other input / output units which connect to automatic data processing units like computers, mainframes, etc.  Exports to India for products under HS Code 847160 was USD 159.3 Million during Year 1 (Mar 2016 to Feb 2017) and it increased to USD 218.2 Million during Year 2 (Mar 2017 to Feb 2018).

The above graph shows a Year-on-Year comparison for monthly global exports to India for products under the HS Code 847160. It can be seen from the graph that every month the exports for Year 2 are more than the corresponding month of Year 1. Exporters may find it useful to note the increase especially for the last 4 months (Nov, Dec, Jan and Feb). This indicates that there has been a significant trend towards more exports to India for computer peripherals and accessories(HS Code 847160).

Why Korea should focus on doing More Exports to India for products under HS Code 847160: 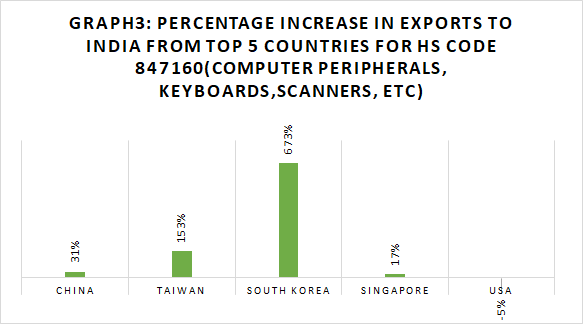 South Korea and India’s bilateral trade has seen a bloom in the recent years due to the efforts put by both the governments to enhance the bilateral trade between the nations. South Korea  set up a state-funded and operated trade and investment promotion organization called KOTRA in the cities Mumbai, Delhi, Kolkata and Bangalore of India and is working to smoothly bring Korean products in India. An example of the success of KOTRA is exports of products under HS Code 847160 which increased by 673% between Year1 and Year2. The main reasons for the increase in the imports of products under HS Code 847160 is that the consumption itself has increased due to the increase in the Sales of Laptops and Tablets and also Gaming in India has increased a lot in the recent years and youth of India being tech savvy demand for more innovative computer peripherals for better user experience and also the Digital India campaign launched by Indian Prime Minister Mr. Narendra Modi which ensured that the Government services are made available to citizens electronically by improved online infrastructure and by increasing Internet connectivity or by making the country digitally empowered in the field of technology. As more Indian consumers (including consumers in rural India) have access to computers or laptops at their residence and workplace as well as more Indian businesses (industry, retail, trade) rely on automation and usage of computers from billing and back office jobs to front end consumer interaction, there has been an increase in domestic demand for products under the category of HS Code 874160. These are some macroeconomic reasons why the consumption of  products under HS Code 874160 has received a big boost in India.

What are the custom duties and taxes applicable for products HS Code 847160:

The import customs and duties play a major role for exporters to export their products globally, cause at the end the final price of the product with duties and taxes decide whether the product is affordable for the target audience or not. To help exporters of products under HS Code 847160 targeting Indian market - we provide the custom duties and taxes applicable for products under HS Code 847160.

For products under HS Code 847160, the Basic Custom Duty(BCD) is NIL (0%) and also the other duties are NIL (0%), which means that there will be no duty charged on the import of products under HS Code 847160. The indirect tax, known as GST(Goods & Services Tax) will be levied in a similar way it is applicable for all other domestic goods in India. Currently the GST rate is 18% of (AV+BCD+SCD) where AV= Assessed Value.

Who is Importing the products under HS Code 847160: